The Greatest Album Of All Time 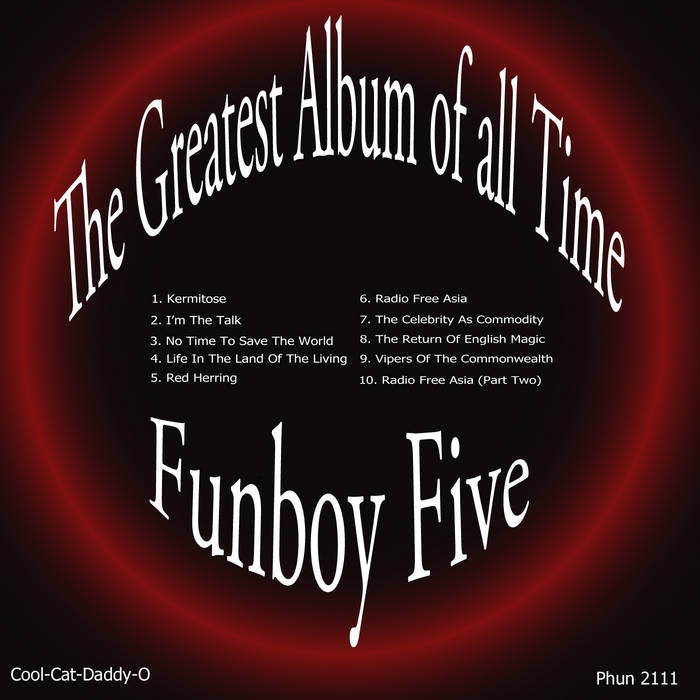 dougkermit If there was any justice at all in this world, the BBC would revive The Old Grey Whistle Test right now and get whispering Bob Harris to play this album in it's entirety on primetime TV on a repeating loop.,
It is that good.
I may be a wee bit biased here but this is well worth your pennies.
Kermit of Hemel. ;0)

The first entirely intentional album* from the Funboy Five, The Greatest Album Of All Time comprises songs written and recorded mostly between 2016 and 2018. Most of the ten have been re-mixed and re-mastered to varying degrees for this collection, a few have not (we’ll leave it to listeners with accurate hearing to guess which) while ‘No Time To Save The World’ is a complete re-working of the 2014 single ‘Save The World’.

*For an unintentional album, see 2015’s vinyl remembrance of songs past, ‘Landmarks, Ruins and Memories’, released in solid vinyl by Ave Phoenix.

On this album, the Funboy Five are augmented by the vocals of Dawn From Next Door ('Kermitose') and Hannah Saunders ('Radio Free Asia', 'Life In The Land Of The Living', 'Vipers Of The Commonwealth').

Formed in January 1979, the Funboy Five recorded a radio session for the influential John Peel Show, and a single, Life After Death/Compulsive Eater, released in January 1980 on their own Cool-Cat-Daddy-O label.

In 2014, the band revived with a new vinyl single, Save The World/What Did You Do With The Body?, followed by further singles and 2019's 'The Greatest Album Of All Time'. ... more

Bandcamp Daily  your guide to the world of Bandcamp

Featured sounds by K.Spark and WIZDUMB, plus Basi joins the show to discuss his latest release.